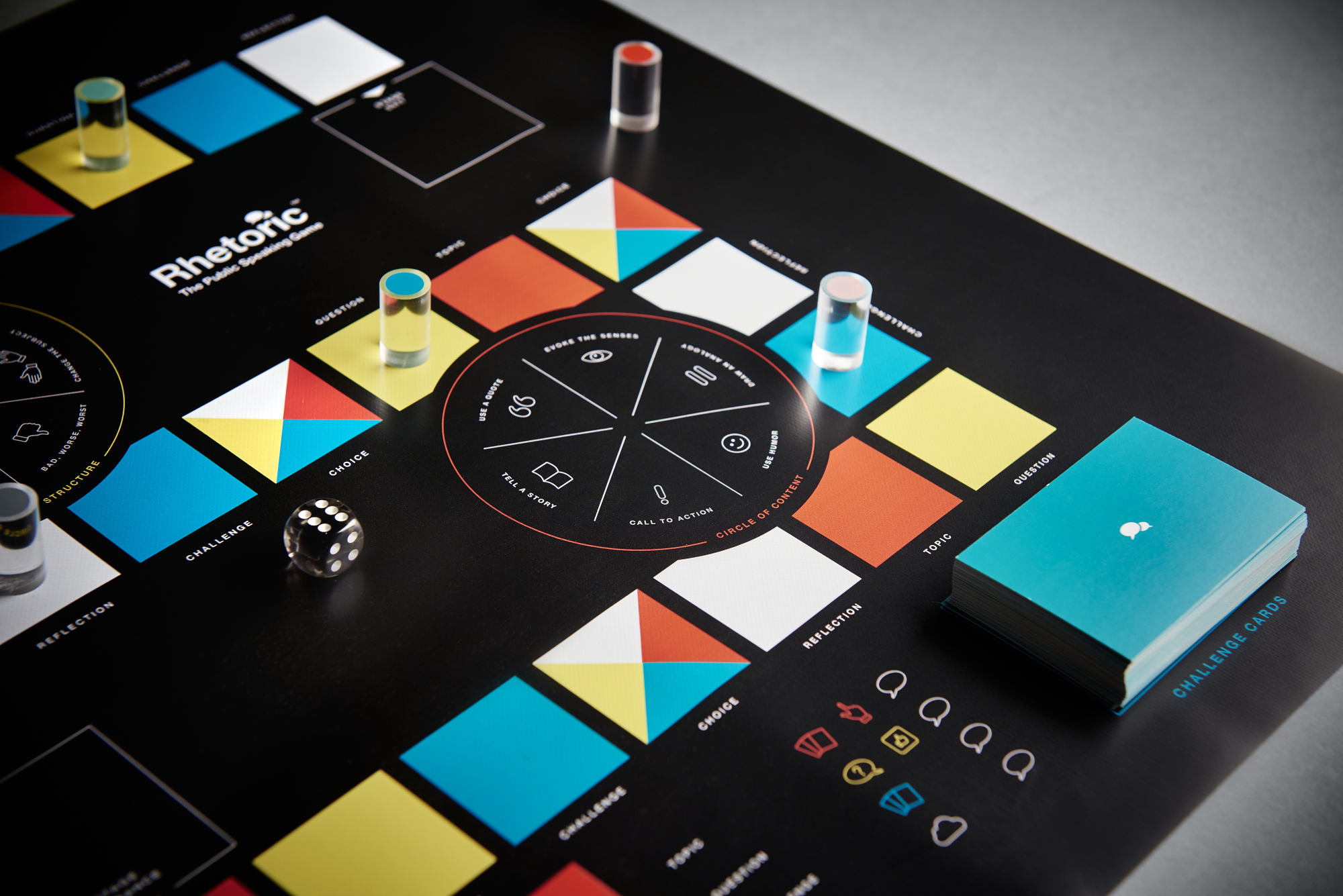 Public speaking. The mere thought of it can set hearts pounding! And yet, being able to communicate one’s ideas in public is an important and sought-after skill. Rhetoric–The Public Speaking Game™ will help you become a better speaker and have fun in the process!

RHETORIC will challenge, engage and entertain you with a series of public speaking tasks. You and your fellow players will step onto the stage and take turns delivering a series of short speeches, as determined by the squares on which you land.

For the past few years, people around the world have played the board game version RHETORIC in companies, organizations and homes. The game has been featured on sites such as Springwise and Game Keys.

RHETORIC is also available as an app in the App Store (for iOS), on Google Play (for Android) and on Amazon (for Android). You can play in English, Spanish, French, Russian, German and Catalan. More languages will be added in the future. And, there are three themes: Classic (just like the physical game); Family (perfect for public speakers of all ages); and Business (great for corporate trainings, agile coachings, and any other business meeting you want to spice up).

Now, it’s your turn to speak!

How much is the game?

RHETORIC is an exclusive board game. Only 1,000 copies were produced.

The game costs €65 plus shipping. The cost of shipping depends on the destination and the number of games ordered. We offer a discount for orders of three games or more.

If you send us a non-binding request, we will tell you the total cost in Euros and your local currency.

RHETORIC is now available as an app for both iOS and Android devices.

The app has all of the features of the classical board game version and can be played in five languages (English, Spanish, French, German and Catalan). The app also has additional features such as a family theme and built-in timer.

This is a lifetime app and we will add more languages and themes in the future. Once you download the app, you get all updates for free. There are no extra costs and no advertisements.

Please visit the App Store or Google Play to find out more.

And if you love RHETORIC as much as we do, we would be so grateful if you would leave a rating and a comment. Thank you!

What players are saying

It's wonderful for children!

My children are 7 and 10. The 7-year old is always asking someone to play RHETORIC with him. Why? He says, "Because I get to make speeches. And Reflection is my favourite because it's easy to speak about what I did in school that day or what I did yesterday." Playing RHETORIC, my children are strengthening their storytelling skills. They think they are just playing a game, but I smile because they are developing important professional skills. As soon as children can read, they can play RHETORIC. It's simple, fun and they get to have speaking time!

From strangers to friends

I started off at a table full of strangers, never met any of them before and, other than being Toastmasters, didn’t know a thing about them. The game is a real ice breaker and great fun. By the end of the game time, we still hadn’t finished because we were laughing so much. Those strangers are now great friends… I was so impressed with the game that I bought it. The After Christmas gathering is going to be interesting this year. Great game, great fun.

I've been playing Rhetoric since 2014 and since 2016 using it in my public speaking trainings and seminars. It has proved to be an excellent tool for training impromptu speaking as it shows the initial level of speakers (in the beginning) and immediate tangible results (in the end of the game) whereas the game is fun to play. I highly recommend the game for those who want to train brain ability and polish public speaking skills.

This game is deep

I was amazed by how much fun, engagement and connection this game generates. You go from laughing to crying and to laughing again in a matter of minutes. And you get to know the people you are playing with in a way you would never do in normal life. Even when playing it with almost complete strangers, we ended up with an incredible sense of understanding, respect and connection.

Get to know them better

A fun game for groups, and a sweet learning opportunity! We have used it in many Agile Coach Camps, and to rave reviews!

Love the game. I also own the board version. Plays very smoothly on my Nexus 5X. Excellent graphics (especially the dice and the spinning wheel). Only downside with the game is the rating competitive games. You can't leave the phone on the table if you don't want others to see how you score. But then again, there is not really a way around that. All in all, a wonderful game.

An old friend, some new acquaintances and a few family members arrived at my house for Sunday lunch. The Rhetoric Game meant they left old friends, knowing things about each other their best friends didn’t.

I remember that little girl

It was at our house party. After a long night, in the morning we decided to play a round of RHETORIC. I remember Alexandra, 8 years old. She participated and gave touching speeches in front of everyone. It was simply amazing.

She made us cry

After a great dinner with friends, Paul insisted, "Let's play the public speaking game." Maria from Portugal was terrified: "I hate speaking in public... No way!" In the end, the story she shared made us cry.

Feel free to send us your RHETORIC action pics and we will publish them here and on our Facebook page.